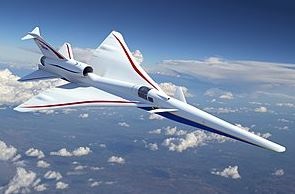 The X-59 is designed to cruise at 55,000 feet, at a speed of about 940 mph, while creating a sound about as loud as a car door closing, 75 Perceived Level decibel (PLdB), instead of a sonic boom. The aircraft will complete a series of flights over populated areas to study the acoustic disturbance in communities, which could help pave the way for revised regulation of overland supersonic flight that would enable supersonic passenger flight anywhere in the world.

LMS’ fuel measurement system will continuously calculate and report fuel quantity and temperature from multiple fuel tanks in the wings and body of the aircraft. Close management of the fuel quantity in the various tanks is critical in maintaining even weight distribution, which ensures the aircraft remains aerodynamically stable throughout the flight envelope.

“We are pleased to have been selected by Lockheed Martin for this project. It is exciting to be part of something that could revolutionize intra- continental air travel as we know it,” said LMS CEO Scott Fewell.

LMS is one of Vermont’s fastest growing aerospace companies, specializing in the design, development and manufacture of fuel measurement technologies for commercial and military aircraft.