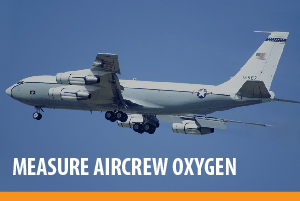 L3H RMS is under contract with the Air Force to convert three KC-135R tankers into WC-135 Constant Phoenix aircraft. The WC-135 carries highly classified atmospheric collection equipment, which allows the mission crew to detect radioactive contamination in real time, in support of the Limited Nuclear Test Ban Treaty of 1963. The planes are deployed to detect and investigate fallout from nuclear tests and accidents involving radioactive material.

Oxygen for the crew is stored in liquid form and converted into a gas, which crew members can breathe through masks in case of emergency, to keep them from passing out if cabin pressurization fails, or in case of smoke, fumes or other air contamination.

LMS’ technology will ensure that the crew has accurate oxygen quantity data at all times. LMS will design, qualify, and manufacture the new Liquid Oxygen (LOX) Measurement System at its facility in Georgia, Vermont. The system consists of a field-calibratable Signal Conditioner Unit and Quantity Indicator display. Both units will operate using software designed and developed in accordance with the objectives of RTCA DO-178 DAL C.

LMS President Scott Fewell said, “Measuring liquid oxygen is a departure from LMS’ usual work in aviation fuel measurement and management, but no less vital to the mission — and in particular, no less vital to the safety of the crew. In this rapidly changing global threat environment, our team is keenly appreciative of this aircraft’s mission, as well as the 45th Reconnaissance Squadron at Offutt Air Force Base, Nebraska, who carry out the mission. And we’re very excited to work with the great team at L3H RMS.”