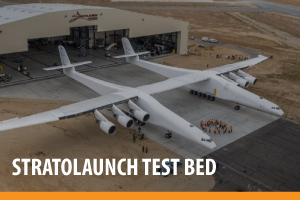 (GEORGIA, VT – 20 May 2020) – Liquid Measurement Systems, Inc. (LMS) has been awarded a contract by Stratolaunch LLC, of Seattle, WA to design, develop and deliver a primary fuel quantity gauging system for the Stratolaunch experimental hypersonic testbed aircraft.  The new system will continuously measure and report fuel quantity in each of the aircraft’s six tanks, with improved accuracy throughout the flight envelope.

LMS expects to complete work on the contract by mid-year, in time for the aircraft’s next scheduled flight this fall.

From its operations based at Mojave Air & Space Port, Stratolaunch has developed the experimental carrier aircraft to provide rapid and cost-effective flight testing capabilities – in Mach 5-plus test conditions — required by government, commercial sector, and academic users in their quest to build, deliver and operate hypersonic vehicles.

The dual-fuselage, all-composite aircraft has a wingspan greater than the length of an American football field. First flight occurred in April, 2019.

LMS’ fuel quantity gauging system consists of in-tank carbon-composite fuel probes and field-calibrated signal conditioner units that translate fuel height into pounds of fuel, and report the data to the aircraft, using embedded software designed and developed in accordance with the objectives of RTCA DO-178 DAL C.

LMS President Scott Fewell said, “We are pleased to have been selected by Stratolaunch to be a part of this bold new technology.  It is exciting to be part of something that could help make access to space and the hypersonic flight environment convenient, affordable, and routine.”