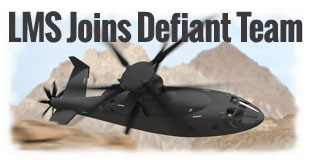 As a member of the SB>1 DEFIANT™ team, RFS/LMS, LLC is responsible for the helicopter’s crashworthy fuel system. RFS/LMS was announced as a JMR supplier along with more than 40 other companies, during the annual Army Aviation Association of America (AAAA) Mission Solutions Summit.

“RFS/LMS recognizes how vital this program is for the U.S. Army’s Future Vertical Lift initiative,” said LMS President George Lamphere, on behalf of RFS/LMS. “We are excited and proud to be part of the Defiant™ team and look forward to providing a solution that will support the Army’s efforts.”

RFS/LMS, LLC is a joint venture between Liquid Measurement Systems, Inc. (LMS) and Robertson Fuel Systems, (RFS), created in 2012 to develop a fuel system for what would become the SB>1 DEFIANTTM technology demonstrator. RFS and LMS have a long and successful history of collaboration in developing, delivering and sustaining state-of-the-art primary and auxiliary fuel systems for rotary wing aircraft.

The Sikorsky-Boeing SB>1 DEFIANTTM technology demonstrator is based on Sikorsky’s X2 Technology™ rotorcraft design with counter-rotating coaxial main rotors and a pusher propeller, and advanced fly-by-wire system. The Army last year selected the Sikorsky-Boeing team as one of two industry teams to proceed with the development of demonstration aircraft. The two demonstrators are expected to fly in 2017.

LMS is preeminent in the field of fuel measurement and reliable fuel quantity gauging systems. RFS is the acknowledged world leader in the development of crashworthy ballistically tolerant fuel systems. Together, RFS/LMS LLC offers the best in today’s proven technology and tomorrow’s innovation, backed up by a solid record of quality and on-time performance. The respective companies believed in 2012, and are proving now, that the needs of Sikorsky-Boeing and SB>1 DEFIANTTM Program are best served by leveraging their long-standing relationship to form RFS/LMS for this effort.

Sikorsky Aircraft Corp., based in Stratford, Connecticut, and a subsidiary of United Technologies Corp. [NYSE: UTX], is a world leader in aircraft design, manufacture and service. United Technologies Corp., based in Hartford, Connecticut, provides a high-technology products and services to the building and aerospace industries.

A unit of The Boeing Company, Boeing Defense, Space & Security is one of the world’s largest defense, space and security businesses specializing in innovative and capabilities-driven customer solutions, and the world’s largest and most versatile manufacturer of military aircraft. Headquartered in St. Louis, Boeing Defense, Space & Security is a $33 billion business with 56,000 employees worldwide. Follow us on Twitter: @BoeingDefense.