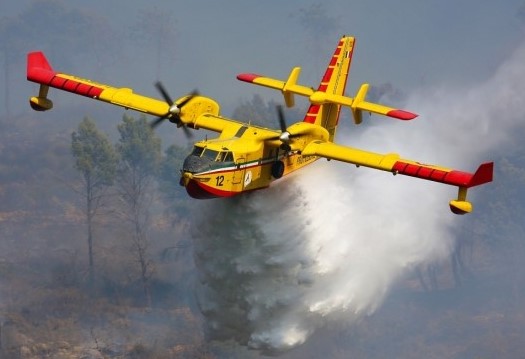 Known as the Water Bomber, the aircraft is able to scoop water rapidly into its belly (up to 1,600 gallons in 12 seconds) from a natural water source near a forest fire, and drop it on the fire without having to return to a remote water station for refilling. This makes the CL-215T and CL-415 extremely efficient at delivering water to forest fires, when time and resources are of the essence.

Viking’s total upgrade will deliver a new, harmonized cockpit to meet the global market’s demand for high versatility amphibious firefighters, as well as anticipate operational and technical requirements for the next 25 years or more.

LMS’ improved fuel quantity indication system will transmit continuous fuel quantity measurement from the fuel tanks to an aircraft data concentrator, as well as to the cockpit.

If launched, says Viking, the state-of-the-art CL-515 aerial firefighter will also use the LMS system.

“We are pleased to have been selected by Viking for this project,” said LMS President Scott Fewell.

He continued, “30-plus years in service has earned these aircraft a reputation as the most efficient means to protect lives, property and nature from uncontrolled fires, the world over. LMS welcomes the opportunity to become part of that tradition, with safe, accurate and reliable fuel measurement, indication and refueling – all of which are mission-critical.”